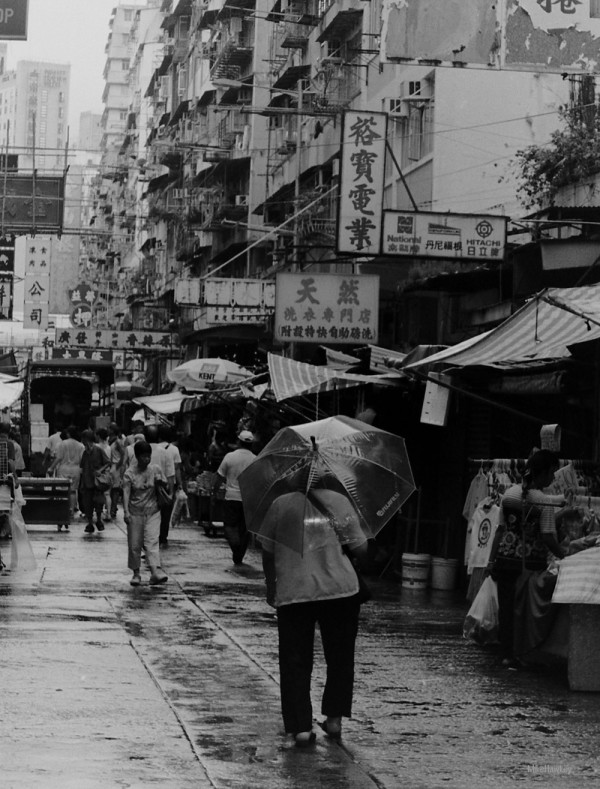 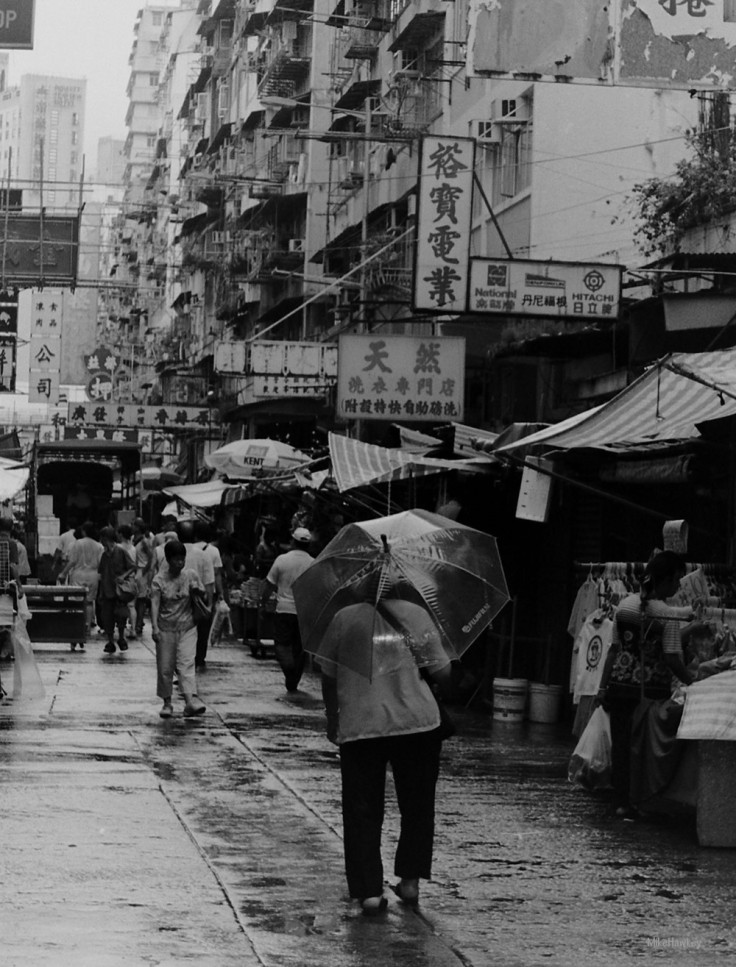 Momentarily when I arrived home, I was happy to see the internet had been fixed…then I sat down and it stopped again. Perhaps its some radio wave I emit when I enter the house!? Its working right now at least, so I will get on with todays post.

Shot back something like a decade now in Hong Kong on my Minolta Dynax, I captured this image from one of the local market streets. It had been raining, and I vaguely recall walking up behing the old lady with the brolly to frame her in the shot looking up the street.

Originally shot in colour film, after it being scanned in, I converted to B&W in gimp, and slightly cropped the aspect of the image.

I’d love to get the opportunity to stop over at Hong Kong again. Its a world apart from here in New Zealand, and perhaps its that difference that makes it so appealing. I love the contrast of buildings and people around. Following various bloggers and youtube channels, I like to see what is changing and what is the same. One day I’ll head back. 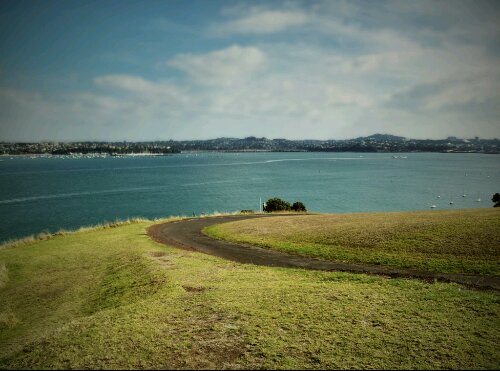 A shot from the Summit of North Head in Devonport, taken yesterday during a bike road. Shot on the Galaxy s2 using the pro hdr app and edited in post with afterfocus.

Still having internet issues at home, which is very annoying. Im quite surprised and unimpressed its taking so long to rectify…maybe tomorrow!?!?… 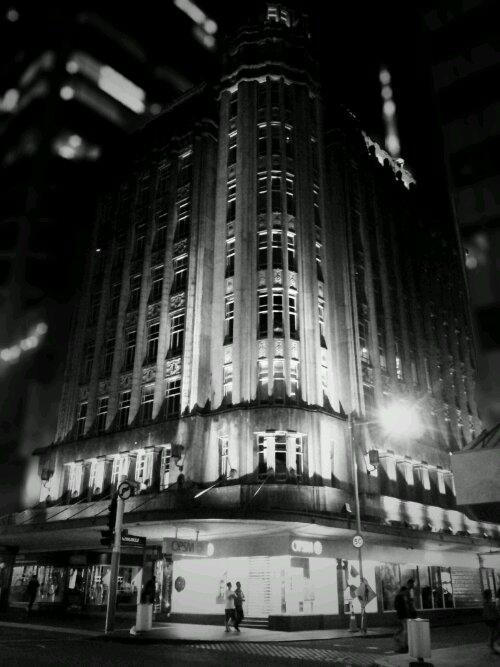 Out for a stroll in the CBD tonight I captured one of the old buildings on the main road -Queen Street. A funny story,perhaps for another time, I recall getting stuck between this building and the next with a friend when we were young kids – eventuating in a rescue!

Shot on the mobile, using androids afterfocus app I converted to black and white and roughly blurred the background, finishing with a vignette. 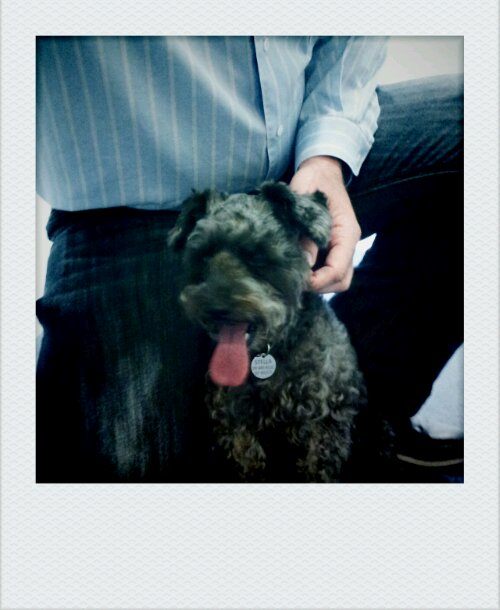 A quick mobile post for today. Monday being monday, things are flat out. Also we have had to disconnect the internet for 24hours whilst they continue to troubleshoot.

Today’s image ‘Stella’ is of a little visitor in at work one of my colleagues saved from darting in and out of traffic on our busy main road. Apparantly according to the lady who picked her up, it wasnt the first time.

Shot on the Samsung Galaxy S2 with vignette.

An old archive shot for today. Not quite sure where the day has gone, but gone it has.

Shot on one of my old cameras, the Canon G12, from North Head, looking into the city. I dont recall if it was any specific regatta day, but I liked how the low sun desaturates all but the sails of the boats.

Resized in Gimp, but otherwise as is from camera.

Sort and sweet again today – we are STILL having internet issues. Its a shame – I have been completely happy with our provider until 3 weeks ago… not so much now based on very slow and non communicative service. 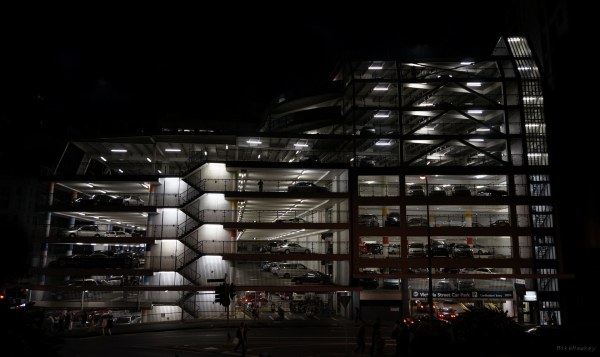 Heading off to the annual Lantin festival in Aucklands CBD this evening, I captured this image of the mid-town car park. I like how at night you can see right into it, whilst all around is black. Its almost like a giant dolls house where one removes the side wall to see what is happening. 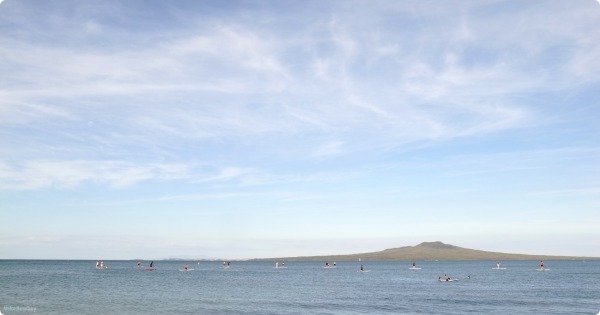 New Zealand, being fairly isolated on a country scale, has a vast history of migrating. The indigenous group of New Zealand, The Maori have legends of the great Waka that brought them to New Zealand from Hawaiki. Some time later the European discoverers came to the South Seas of the Pacific – Abel Tasman,and most notably Captain Cook. Soon enough people from England (and other areas of Europe) came to the brave new land and settled. Skip forward a few hundred years (we are a fairly young country) and we still see people coming to New Zealand for its beautiful lifestyle.

As a side, this got me thinking about passports and the process involved in moving from place to place. If anyone has any interesting articles/books on when exactly the world was divided up to the level one needed ID and permission to move from one land to another please add a comment. We take it as the norm now, but it cannot have always been such.

Todays image, ‘Beach Migration’, influenced by my thoughts, is of a group of paddle boarders of Aucklands Takapuna Beach. Cutting out the beach in the foreground, I wanted to create some form of impression that they are heading to Rangitoto Island.

Shot on the Ricoh GRD IV and edited in the OSX version of Gimp 2.8 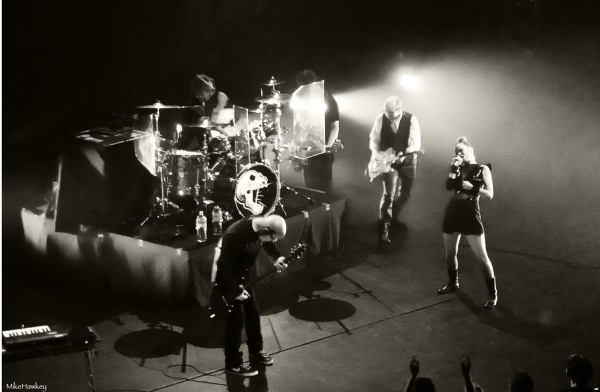 As posted yesterday, Wednesday night I attended the Garbage concert at the Auckland Civic. Being concerts can be iffy about cameras, especially ones with Lenses that look big, I took along a Ricoh CX6. A great little camera with 10.7x zoom, as with all small point and shoots, it struggled a little with focus at times, and certainly had some noise at the higher ISO’s. Turns out other people (non officials) had walked in with their DSLR’s, so I could have taken something more substantial, but never mind – a great little camera with a big zoom that fits in the pocket, and has many of the custom aspects my usual GRD IV has.

Capturing Shirley, Duke, Steve and Butch, I cropped in a little on todays image. To deal with noise, I decided B&W was the way to go, and also pushed the contrast and slightly adjusted sharpness. All done in CS5.

Today marks a bit of a changeover in post image shooting for me. We purchased a new Mac, and my Linux machine, although still in use, is slowly getting things transferred over from. I like to use all OS’s, so will continue to do so, but mostly for now on OSX. Likely I will continue on with Gimp, but I also have more opportunity to keep in practice with Photoshop and the like also – something I have mentioned before, I am well out of practice with. As we are still battling with ISP issues, I have not yet managed to get Gimp on the Mac, but will attempt again over the next few days.

A quick post before the end of the day.

Shot on the Samsung s2, I hope to share some more tomorrow’ish.

Garbage rocked the Civic at Aucklands CBD. A great concert, many many years since they came to NZ. 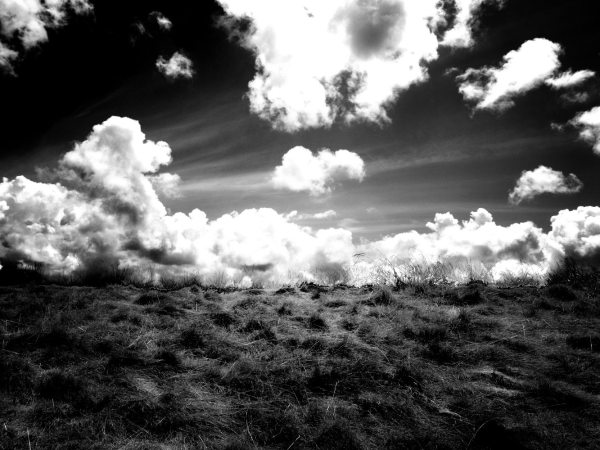 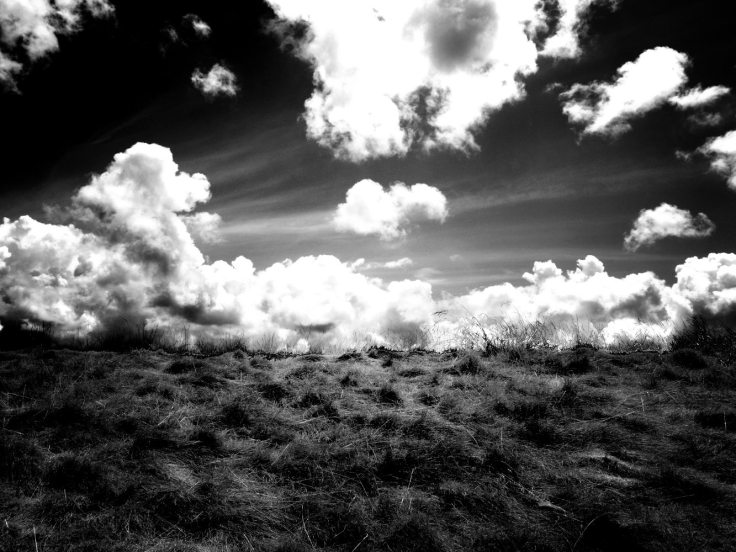 Ranginui and Papatuanuku (Rangi & Papa) are the two primordial parents relating to the creation of the universe in Maori legend. To summarise loosely (check the full story here), Rangi and Papa lived embraced together. Their children were always stuck in the dark, cramped and unhappy. Eventually they decided to separate the two, and one of the son’s, Tane-mahuta successfully pushed them apart by resting his back on the ground and pushing up with his legs, Rangi and Papa screamed and cried, but they were forever separated – heaven and earth.

For today’s image I shot a simple grassy ridge and sky. Pushed the contrast and leves in the sky and slightly on the grass. Converted to B&W and added a vignette. Shot on the GRD IV and edited in Gimp.

All going well, this posts tonight. Ongoing ISP issues still…hopefully resolved tomorrow! Also off to a music concert tomorrow night. Hope to get some shots.