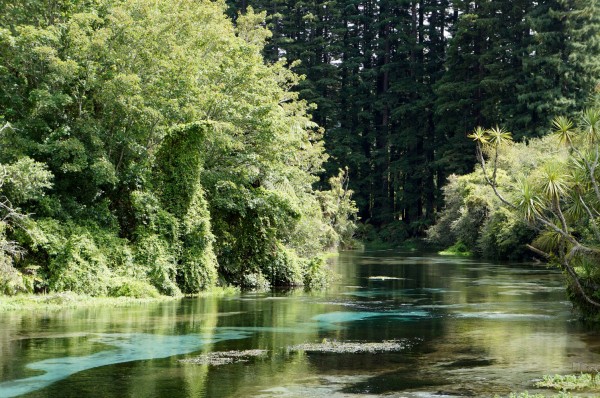 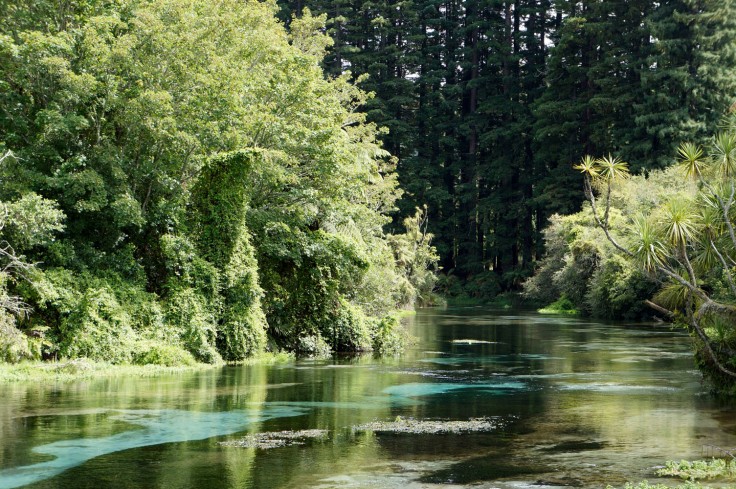 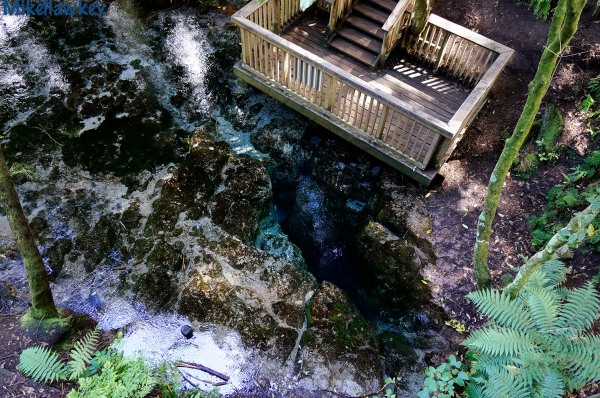 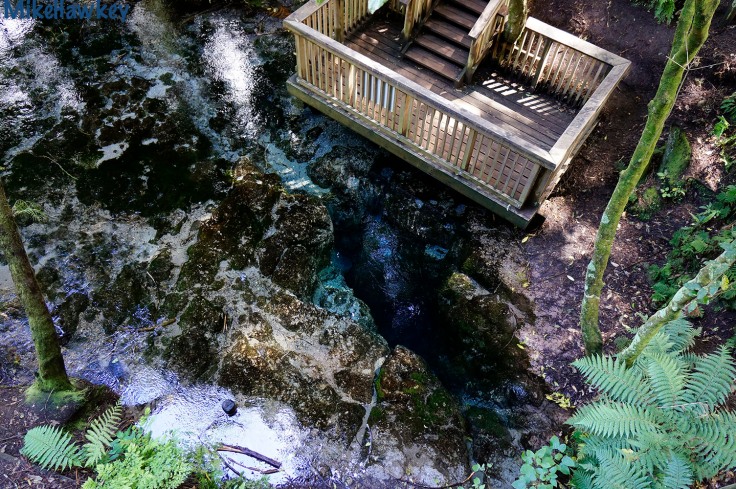 Once in a while, going light on your gear leads to missing an image. It is a weigh off I am usually fine with, but on this occasion, it was a real shame I didn’t anticipate the need and carry my polarizing filter! With it, I think the photos really could have at least partially shown the beauty of this spot.

On the west side of Rotorua, we visited the natural springs of Te Puna-a-Hangurua. The main spring (pictured above) is the biggest in New Zealand’s North Island and flows 4,500,00 litres of water each hour, after taking around 70 years to surface!. 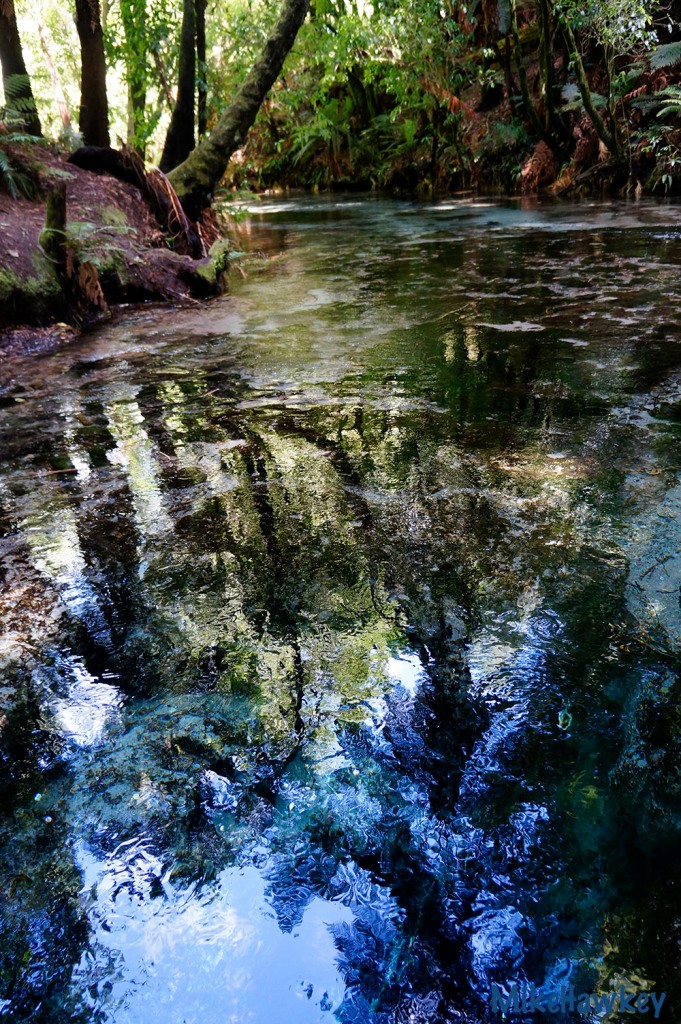 It really was so beautiful and blue, encouraging one to jump in for a swim – although this is not allowed at the initial exit point. Way back in 1957 they sent two skin divers  down whom recovered 5000 pennies (coin money) dating back to 1860 – the ‘loot’ then donated to children’s charities. There certainly was not 5000 coins there today, but I suspect they clean it out periodically as there was still a fair bit of coinage for people likely tossing one in for good luck. 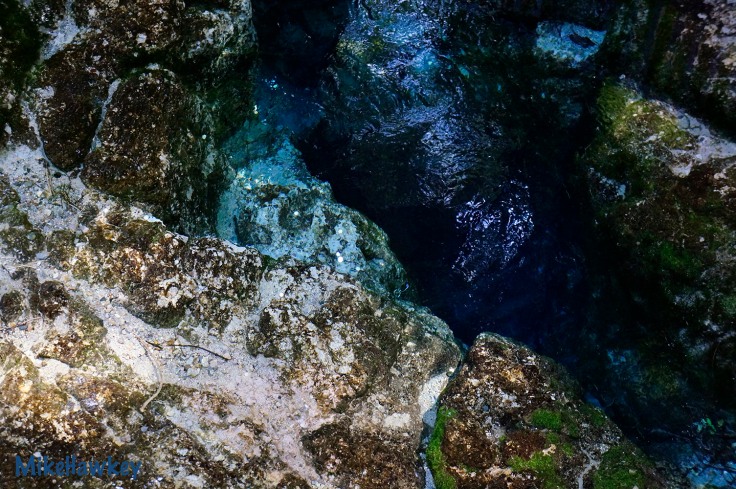 Eventually, after passing through many points of interest and waterfalls, the water exits into the Pacific Ocean. 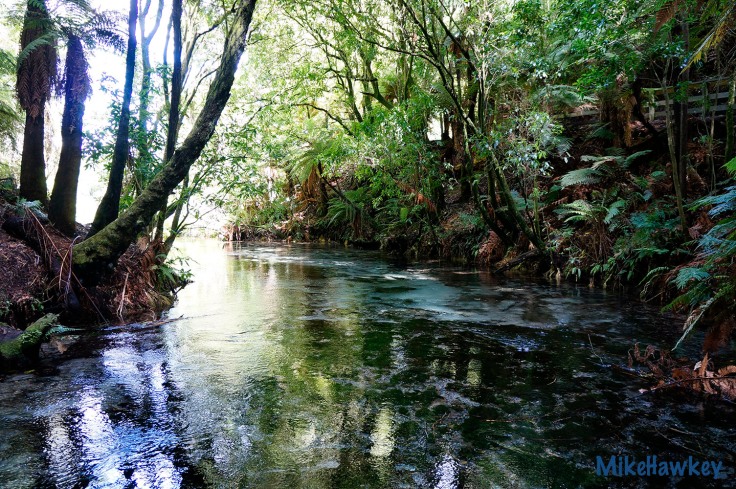 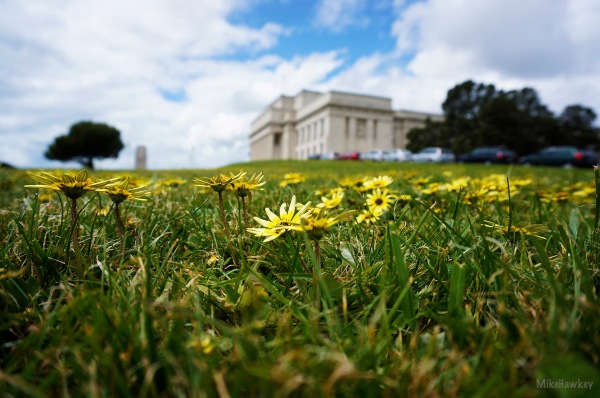 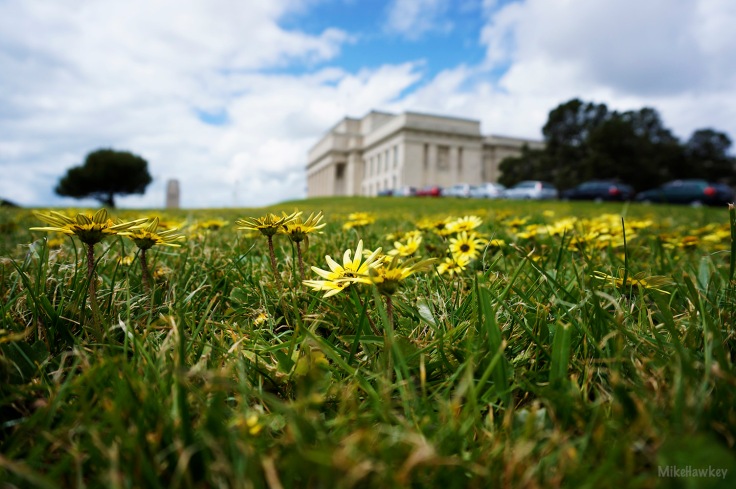 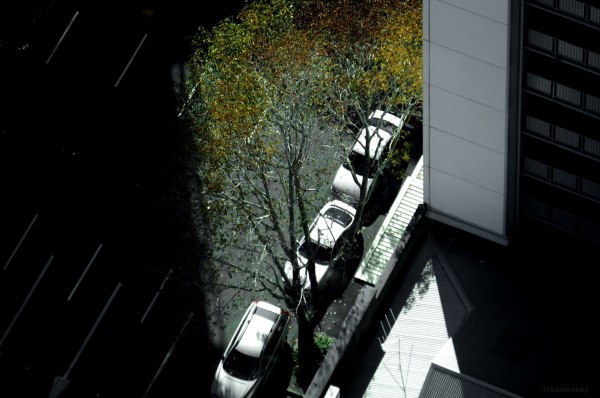 A shot from above.

Looking down I snapped the autumn tree, its colours beaming out from both the shadows and grey city surrounding.

Shot on the Nex 5N with the 55-210mm lens. In Gimp I desaturated the blue tones, giving the city buildings the mono tone.

More shots from above tomorrow. 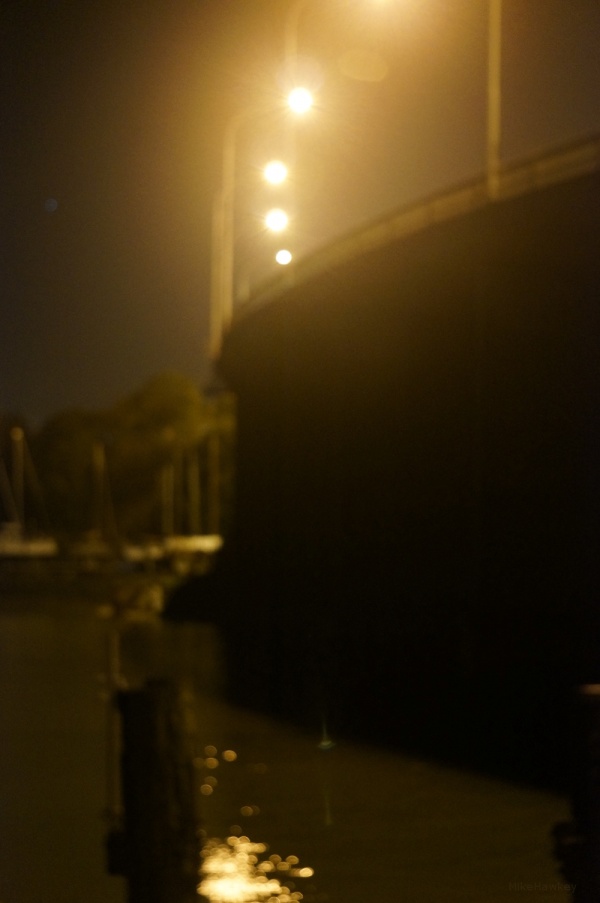 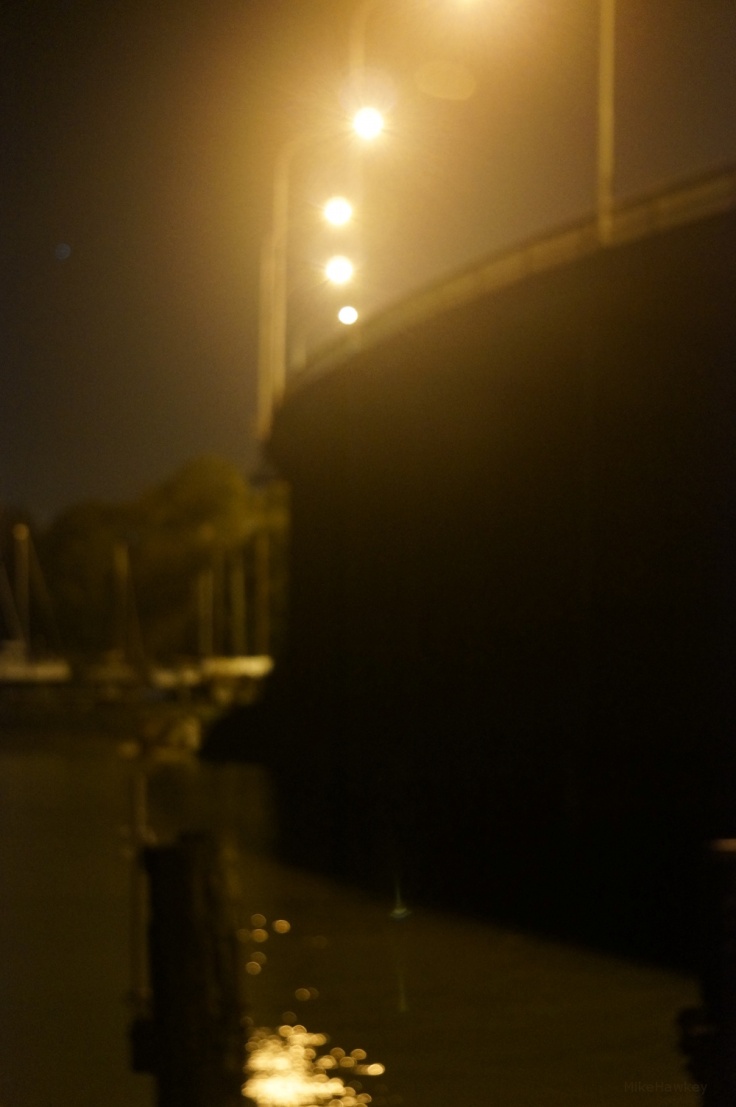 I drive on her streets cause she’s my companion
I walk through her hills cause she knows who I am
She sees my good deeds and she kisses the windy
Well, I never worry, now that is a lie

A quick capture from a short after work walk. 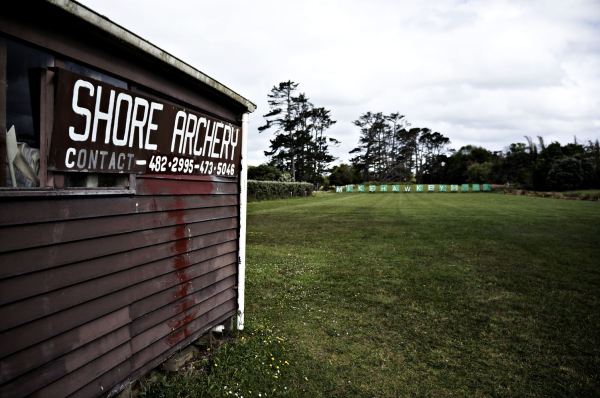 Today marked a once in 16 year Solar Eclipse for New Zealand. I had taken my Nex and filters along to work, aiming to capture some form of it at about 10.20am. As my schedule would have it I had back to back meetings from 10am to midday, emerging out from the meeting room well too late and to be told by some others that it was great… oh well, I have plenty of time to book the next one into my diary!

Taking a stroll after work I came upon the Shore Archery Club. The weather was starting to pack in, with clouds spitting their collections of water, so I took a few shots before making my way back to the car. Shooting both at zoom stepped back, and wide angle up close, I wanted to make the targets visible, but not to sharp. I settled on the wide angle version in the end.

In post processing using Gimp I adjusted the contrast and then applied the national geographic filter. After that I removed some of the sharpening layers the filter applies, and finally added my name onto the targets – just to be a bit different than my usual sig style.

I’m Still(!) trying to finish off the roll of B&W film in my Rollei 35. Its funny how even now, after predominantly shooting digital for an age, I don’t waste shots on film so much. Being a totally manual camera, including guessing the focus distance, one has a lot more time to think and decide if the shot is not quite right. I’m sure if it had been in my Ricoh GR1 I would be developing it by now. Still, that’s part of the film appeal to me. 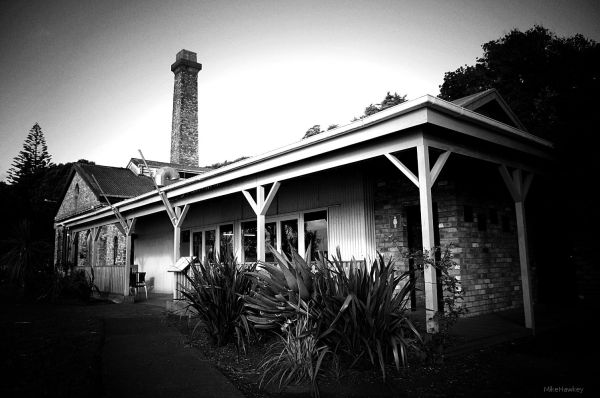 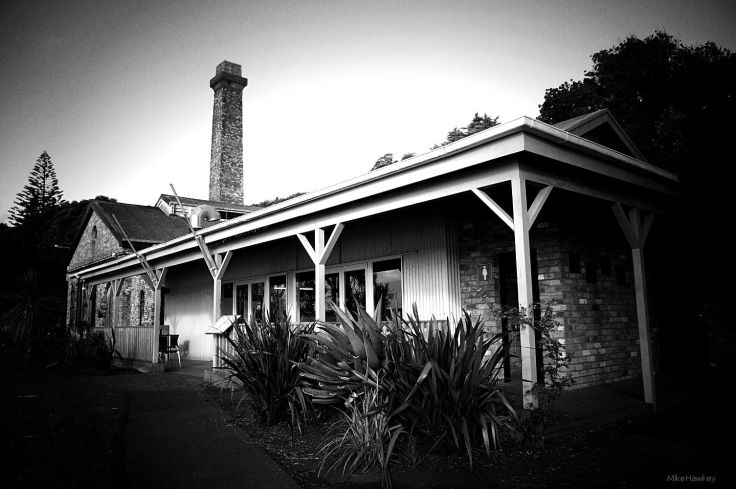 Back at Lake Pupuke for a walk with the Nex 5N and kit lens, I captured The PumpHouse up a little closer than I have before in a previous post. Once used, unsurprisingly, to pump water to the local suburbs, the PumpHouse is now home to a cafe, and hosts regular stage shows and art works.

Image wise, using Gimp, I played around with some of the film grain simulators. They are fairly customizable, and although nothing is real film grain, I think they can do a pretty good job if that is the look you are going for. I also applied a sharp filter and played with the levels a little until I got the look I was after.

Tomorrow morning is the Auckland Marathon. I’ll be in the half marathon, so don’t think I will get the opportunity to take any action shots, but will see if I can get something themed around it…assuming my low-to-no training allows me to walk after! 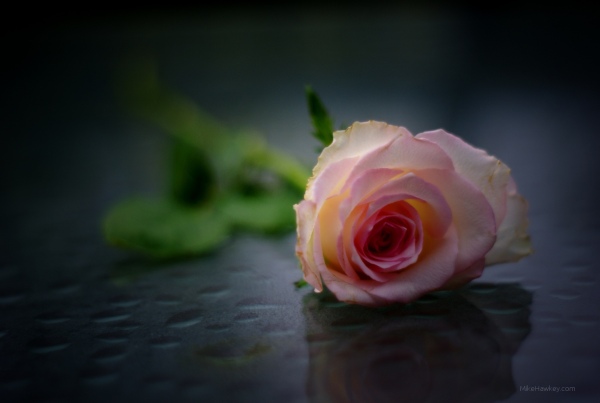 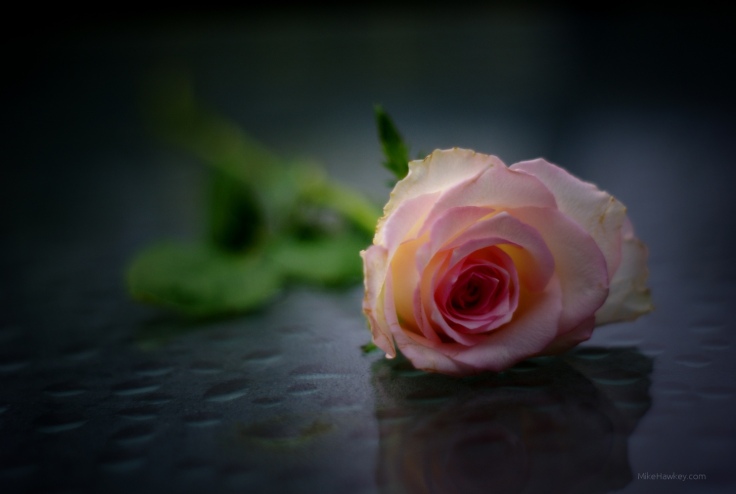 My last pre-scheduled post as I should be back in the country and in front of technology tomorrow! Another archive image of a left behind flower my partner had forgotten to take with her.

I edited it at the time in CS4 so cannot recall now what I actually did. I do remember setting it up on a wet glass table, and shooting it with my Sony A230.

Much like the flower, the rest of the details were forgotten!
Back tomorrow! 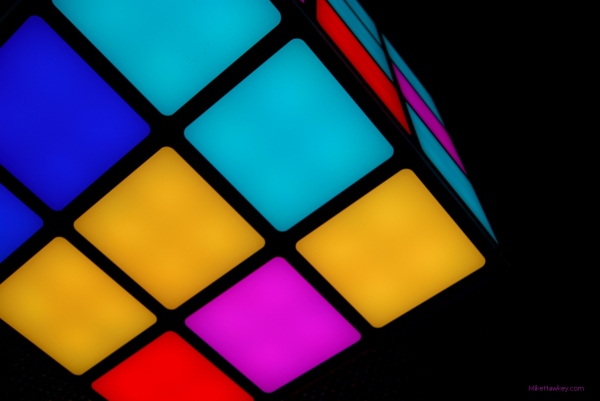 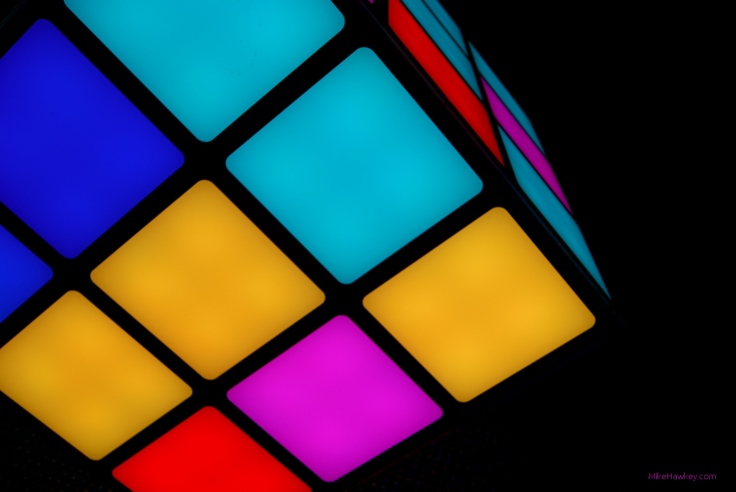 Another Archive shot. Taken in the Powerhouse Museum, in Sydney, Australia.

Not too much to say about today’s image really. It was a brightly lit cube in a dark room. I love the simple yet attractive image it created.